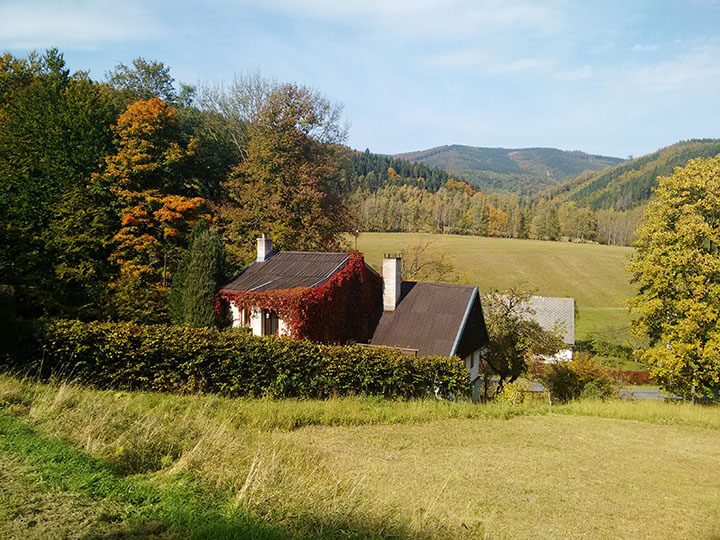 Most people in trains like to sit facing the direction of movement. They say that they can see something coming up that is interesting, and they want to see it for as long as they can. However, I like to sit facing backwards, because this way I can see where I have been, but not where I am going. I enjoy travelling to new lands and thinking up new concepts. I’ve always loved adventures!

Travelling in the Czech Republic during autumn is a colourful experience. Nature is beautiful, dressed up in red.

My Brazilian friend Waldelaine, bought me a train ticket to Horní Lipová, a village close to the border with Poland. She promised to show me a unique place hidden in the woods, full of surprises! I was lucky she chose me as director for her short movie. She was practicing her speech, while I was trying to capture the light passing through the window.

The landscape in central Europe is usually a monotonous grid pattern of fields, roads, forests and settlements covering huge areas. But I do love forests! One day, I’m determined to not follow the beaten path and get lost in the woods, among old oaks and beeches…

We had plenty of time to discuss her project on the train from Brno to Horní Lipová. She looked happy and creative with that yellow sweater. I really like creative spirits who become inspired by anything and everything, from an unusual pattern on a leaf to the massive mountains.

We could see the Rychlebske (Golden) Mountains towards the east. The landscape was not as flat as I thought. This small mountain proves that the inner earth moves up and down to a beautiful rhythm! The Golden Mountains form the mountain range in the Eastern Sudetes, which stretch from the Kłodzko Valley and the Nysa Kłodzka River to the west, down to the Moravian Gate to the east. The train stopped.

The Weather Forecast predicted a rainy morning, yet the sun was shining and the sky was blue. The village welcomed us with a fruity path; pomegranates, apples and pears lied on the ground. A wooden sign showed the hiking trail from Horní Lipová towards the summit of Smrk (1125 m). Near the village, there is also a fauna park, a bear cave, a ski resort and the Priessnitz Spa Resort. Waldelaine explained that we will hike for 2 km to Lesni Bar, a small “bar” in the middle of the forest. To get to Lesni Bar, we followed the blue and yellow signs on the trees only to get lost in a world of colours and aromas.

The walk in the woods is an anti-stress therapy.

We were standing silent in the forest, staring at trees. I looked closely at all the details around me: dark green firs, bright green beeches and oaks in the sunlight, all separated by a well-worn trail. I once read that trees are social beings. They communicate using scent, they know how to save energy, and they use their roots to share food with their own species, and sometimes even go as far as to nourish their competitors. Every tree is a member of a community. There are many advantages to working together. Trees cooperate to create a protected environment where they can grow old together.

If every tree was looking out only for itself, then many more trees would die.

Walking down the path towards Lesni bar, I felt unique energy around me. Time in that place is measured differently. If only I could record the energy… Nature is such wonderful serendipity! Can we as humans, take forests as an example to build a social network that actually works? Maybe it sounds very romantic, but I believe we can learn a lot observing the forest.

At the end of the path, a beautiful wooden world appeared.

The Forest Bar is a project in the Spruce Forest of the Jeseníky Mountains. It is equipped with a wooden house, tree bark chairs, picnic tables, a fireplace and special troughs where hikers can refresh themselves with various cold beverages and spring water. The drinks are kept cold by running water redirected from a stream. Hot coffee and tea can be prepared there and snacks are always available. There are traditional sweets (Staromestske maslove trubicky), which are produced in the nearby village of Branná.

You can also find an Upper bar (800m walking, or 4.5km for bikers from the Forest Bar) and a special “mountain shower” with beautiful views (you will see Ramzová, Obří rocks, Šerák, Keprník). The Forest Bars operate 24 hours a day. Cyclists and tourists can take whatever is offered; they can serve themselves beer, they can grill meat or make tea. There isn’t however any staff on site so you’re trusted to pay for your drinks by putting the proper amount of money into a collection box. People might doubt that a business like this could thrive without having its inventory or money box stolen. But the Lesní bar has been operating for over a decade. 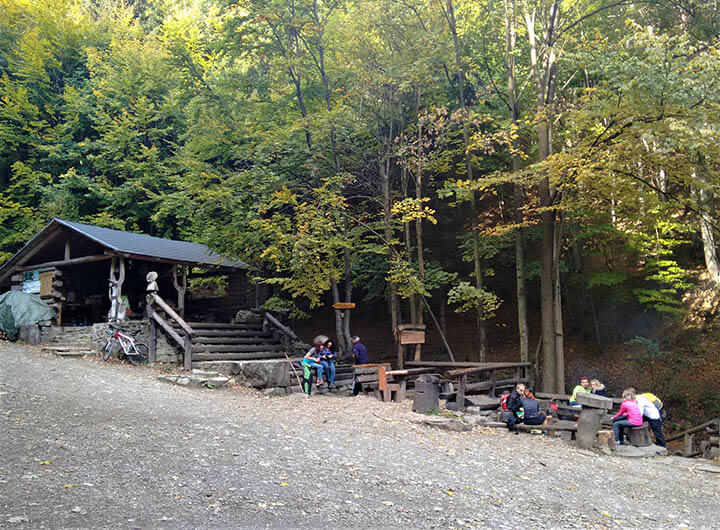 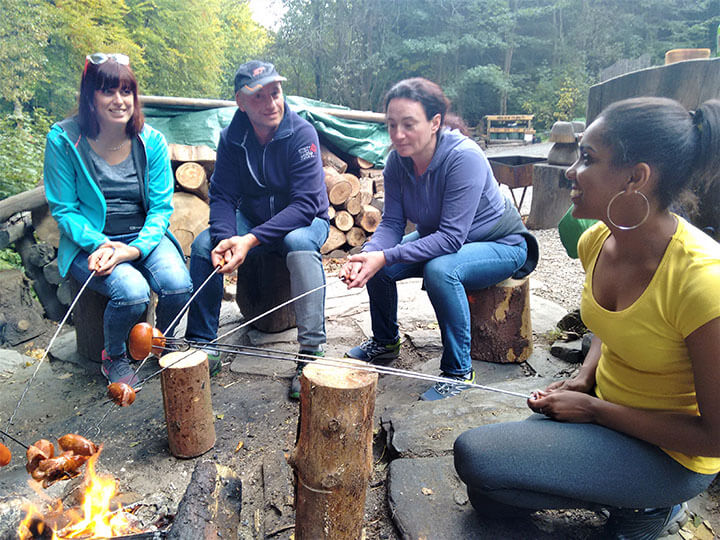 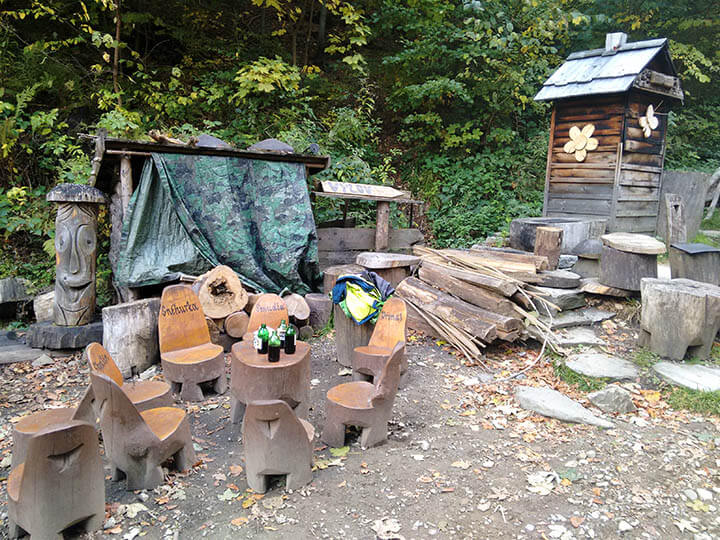 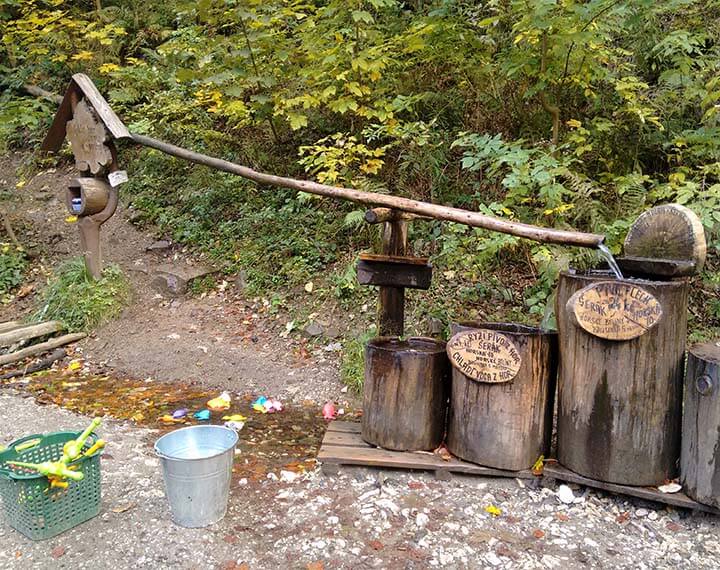 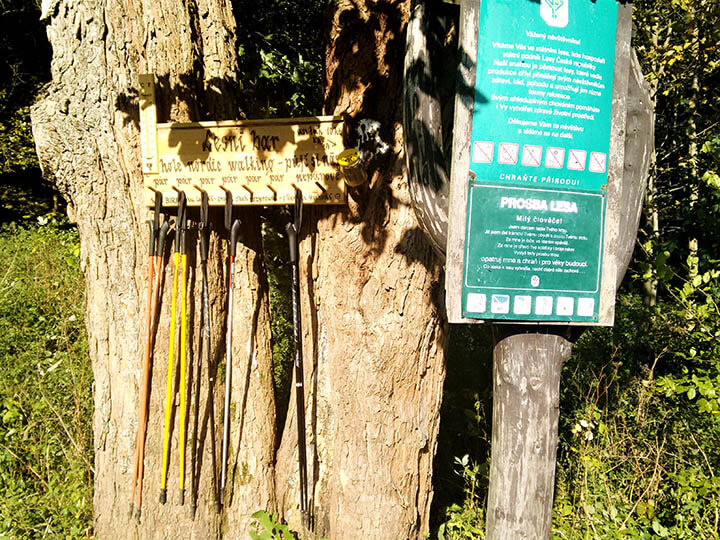 What a beautiful idea!

It’s an interesting and courageous business philosophy. However, how does it work? Who is supplying food and beverages on a daily basis?

I prepared breakfast for Waldelaine and myself, we shared a table with a friendly group of Czech hikers. They liked our idea for a short documentary and they wanted to participate. While I was filming our nice company, I saw a guy coming out of a van, carrying boxes with supplies. Waldelaine said that he is coming twice per day to bring food and beers. I would like to talk to him, but unfortunately he doesn’t speak English.

When Václav Pavlíček, forest ranger and creator of the Bar, came with the idea in 2003 to build a self-service bar deep in the forest, he did not know his idea would become so popular over the years. He called it a “test of honesty” in a 2009 interview with iDnes.cz.

”We’ll be glad you can do it with us. We would like to see if such a project based on good manners and ethics could be achieved in an urban environment”.

Ten years later, it seems that his test has been a success. His idea about an open bar came to prove to people that it is possible to make a fair business.

I got feelings of euphoria all throughout my body! We had discovered a hidden place, an oasis of peace, tranquility and hospitality. People in this forest like to communicate, share and work together. I don’t know if this project can be applied in an urban environment, but I love to learn more about the secret life of trees and to be part of this community. We spent all day playing in the forest, snacking and listening to stories.

That’s what serendipity is to me: the art of finding the happiness in yourself and around you. 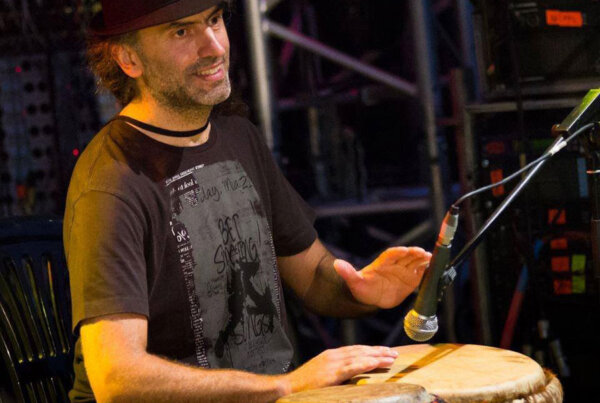 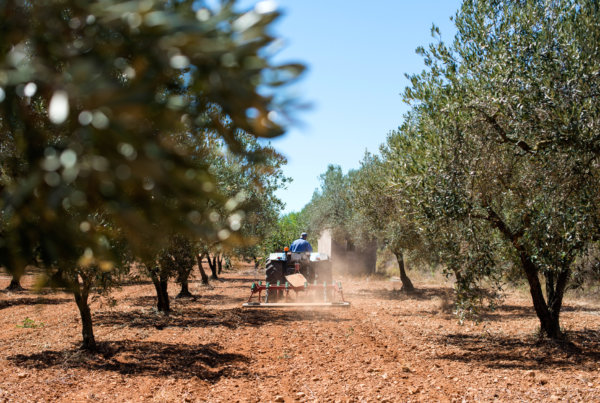 The land of olive trees – Messenia